The Hanwha Eagles of the Korean Baseball Organization

The Hanwha Eagles started their uHIT journey back before the pandemic when we regularly offered uHIT Assessments with brain measurement. As we shifted to more remote ways of training, the Eagles found uHIT Custom and uHIT Gameday to be two vital parts of hitter development. Here, we highlight team trends in usage as they worked to integrate uHIT into other aspects of hitter development, and we look at three players whose on-field results illustrate perfectly how the personalized training of uHIT Custom and the game-specific programs of uHIT Gameday helped them achieve in 2021.

uHIT Gameday is a modification to the standard uHIT app that allows hitters to train at-plate decisions against the pitchers they will face that day. Our uHIT Specialists work with a team’s analytics staff to get the right pitch data for opposing pitchers and make an active scouting report for every hitter to have available on gameday.

Here, we see the Hanwha Eagles’ journey in broad strokes on starting uHIT Gameday in 2020 and continuing it in 2021. In one season, they increased their usage of Gameday by +52% (up to 14,383 pitches). In this post, we analyze some of the major players that contributed to that usage spike and we look at their offensive output changes on the field. 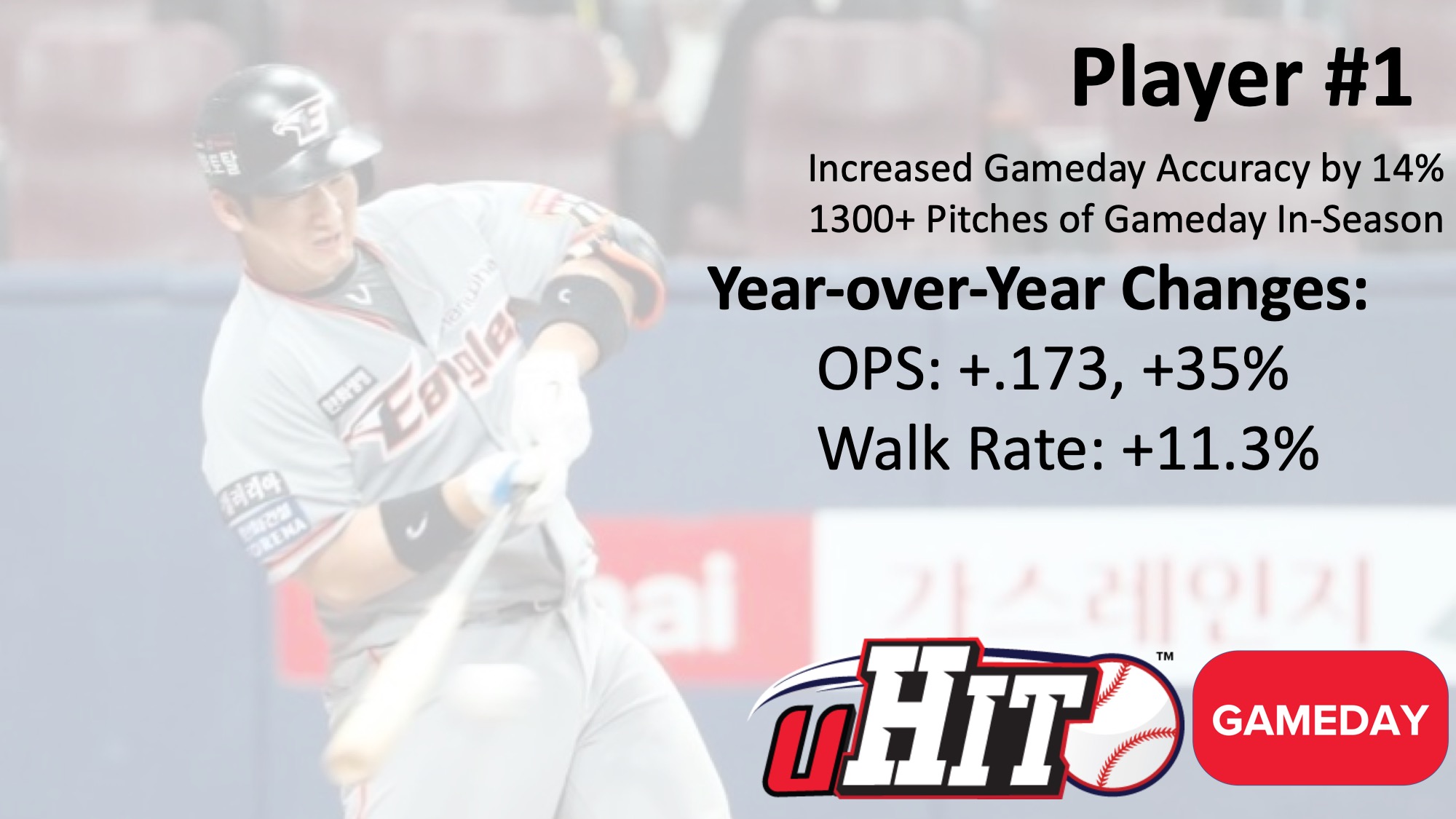 Player #1 had already begun making uHIT’s Gameday part of his pregame routine for home games in 2020. The Eagles opted for using uHIT only at home games during 2020 and the differences for in-game hitting were clear when compared to the preparation (see this post for more). With AVG being +89 points (+45%) higher at home in 2020, Player #1 took the initiative in 2021 to make Gameday part of his daily prep whenever he could.

Player #2 demonstrates a trend we see often with uHIT: utility players can demonstrate major strides in offensive output, despite limited plate appearances by using uHIT. In the case of Player #2, uHIT Gameday was the tool of choice and it led him to greater offensive output when he was called upon to jump in.

Every player comes to uHIT’s array of tools on their own terms. And Player #2 was no different: in 2020, he only used uHIT Gameday a handful of times, accumulating only about 3-4 pitches on average per game. But in 2021, his usage of uHIT Gameday skyrocketed, and with it was his in-game hitting output. In 2021, Player #2 did 3200+ pitches on Gameday, doing more than +500% more pitches per game. The results on-field then followed.

The two biggest drivers of the OPS change were also in those metrics that hitting coaches regularly watch: Walk Rate and Strikeout Rate. Being more prepared for the pitchers he could face when called upon, Player #2 saw his Walk Rate go up +5.2% and his Strikeout Rate plummet -16.9% year-over-year.

Wrapping it all up, Player #2 is a great example of how hitters can come to uHIT’s array of tools on their own terms. Player #2 wasn’t ready in 2020 to make uHIT Gameday part of his routine. In 2021, he change his approach and, with it, he changed his offensive output. 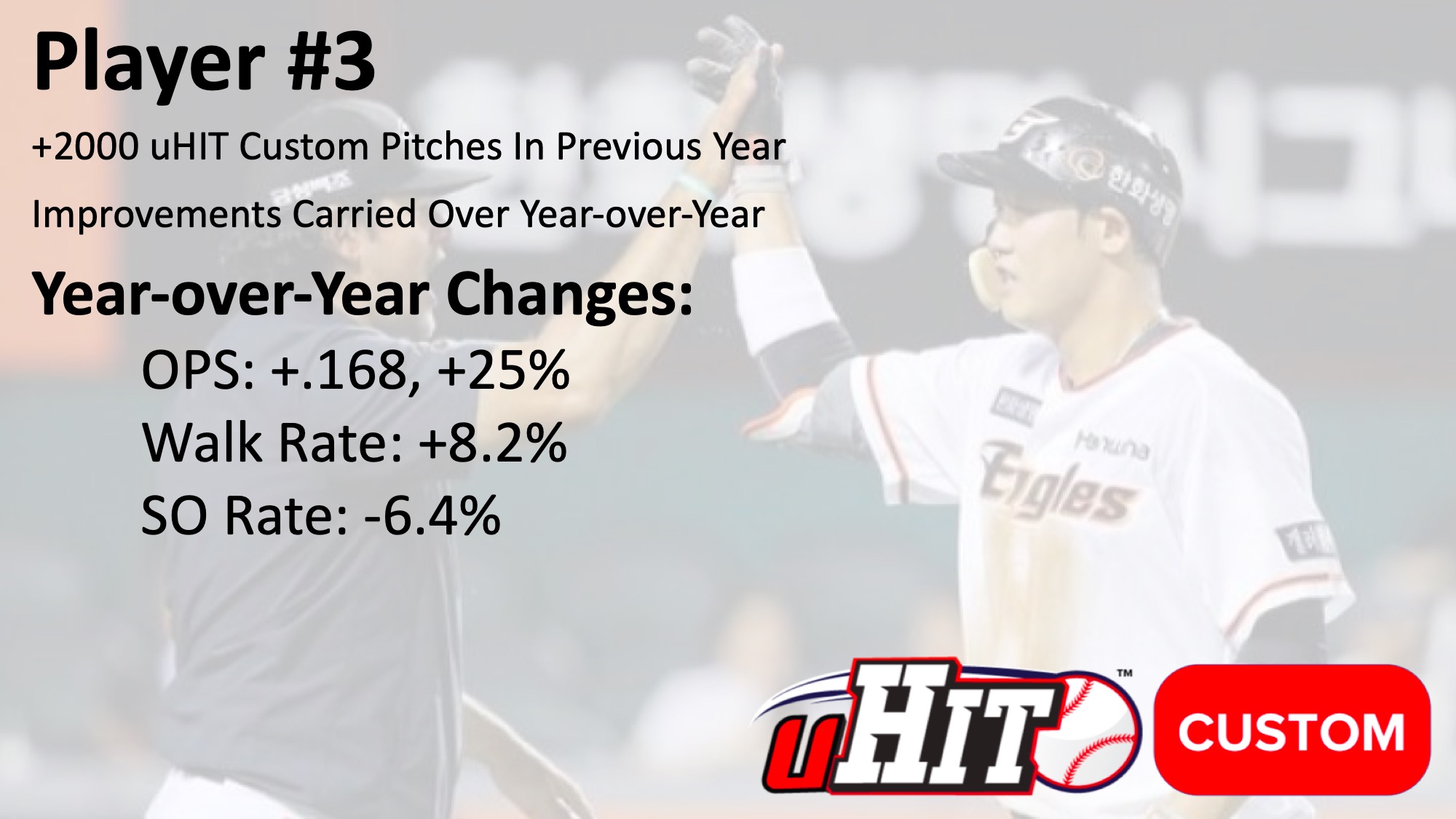 Player #3 is a textbook study on how a coach can revamp a hitter’s approach without touching his swing. Our uHIT Specialists worked with the Eagles’ Hitting Coach and Analytics Manager to implement uHIT Custom for Player #3’s Zone Recognition skills in 2020. You can read more about those results here, but what we saw in 2021 gave us new data points on how long uHIT Custom’s effects can last — in this case, more than a full season.

As with Player #2, Player #3 came to uHIT on his own terms in 2021. While in 2020 the hitting coach and analytics manager guided his use of uHIT, everyone was more hands-off in 2021, knowing that zone recognition skills had been acquired from the previous season. Still, there was “check-in” type usage in 2021 that we could use to compare these skills year-over-year — and we saw the skills stayed with Player #3: his XP (or points) per Inning in uHIT Custom more-than-doubled (+101%) and his Accuracy went up almost +9% in 2021. Since XP is a combination of Accuracy and Reaction Time (to the zone for strikes), we can see that most of that +101% increase in XP is due to a faster Reaction Time to the zone for pitches Player #3 can do damage on. How would that skill translate to the plate?

In 2021, Player #3 had a breakthrough in offensive output, particularly in power numbers. The OPS went up +168 points (+25%) year-over-year, and there are many contributors to that from Walk Rate (+8.2%) and Strikeout Rate (-6.4%). But the biggest change in Player #3 from 2020 was in HRs: a +50% increase in HRs year-over-year sealed the deal for the benefits uHIT Custom delivered. The hitting coach and analytics manager knew Player #3 had power (he hit 12 HRs in 2020), but his high frequency of strikeouts in 2020 and other poor decisions at the plate held him back. With the addition of uHIT Custom to his decision arsenal at the plate, he hit +6 more HRs without any obvious changes to his swing or his physicality. Player #3 is yet another story about how each player comes to uHIT’s tools via his own path and takes them where he needs to go.